UVA HOSPITAL
On Monday I had to have a procedure - a myleogram - done at UVA where they  inject a dye into the sac around the spinal column which on me is a full “S”....called scholiosis, a CT scan, and a bone density test. It took all day, and then we picked up our little Eloise and headed home. By Tuesday morning the spasms had returned, and they came back with a vengeance. Poor Eloise had to wait on her Baga instead of me waiting on her. I was supposed to drive her back on Thursday, but was unable to make the trip. One of our dear friends took her back for me. Today is Saturday, I think, and I am still in spasms...and I am getting tired of it all. They had better be under control before Monday because I AM GOING to work come heck or high water. Oh, I forgot to say the instructions were to be still and quiet and to keep my head elevated. All I can say is the dye really fired up the nerves and I have not been out of pain and spasms since Tuesday.

FIRES ON THE MOUNTAIN
Just for some sweet icing on the cake of life, our house has been in the CENTER of one (5 different ones are burning) of the forest fires raging at this time - The Rich Hole Fire.The main operation center for this fire has been at our volunteer fire depot about 5 miles from the house, but many of the trucks have been going up from a spot on a dirt road beside the Quaker church -less than 1/2 mile from the house. A BIT SCARY! Fire trucks have been brought in from all over and vans with Virginia Emergency something written on the sides. These were definitely not the type vehicles we see at the Quaker Church each week. We took Eloise out to dinner on Tuesday night, and on the way home we could actually she the huge red fireball on top of the mountain. Stopped at “Command Central 2” at the Quaker Church be told to go home and get ready for evacuation...that some of our friends had already been told to leave. Poor Eloise was scared to death and was running around the house getting all of her pictures I have everywhere and putting them in my suitcase. Before I knew it she had hauled it out and put it into the car!I grabbed my jewelry box, all important docs, the computers...and I shoved them into the car. If the posse arrived, Eloise was to grab my clothes from the closet. Bud got the cat into a carrier and his pack, sleeping bag, and other IMPORTANT items and he was ready...no true hiker would leave those behind. Eloise refused to take off her shoes and clothes because she had to be ready to leave the minute someone knocked on the door. So, all night long she was kicking me with her feet trying to move all over my bed. As she would take over one side I would get out and go to the other side. This happened several time during the night. NOT good for a back in spasms as are not being still, calm, and quiet as instructed by the doctor.

Here is the comment of the century....”Baga, it really wouldn’t be so bad if the house burned down because IT REALLY IS VERY OLD. Then, you and GrandBud could move to Richmond and live beside us. I would really like that.” And then in the next breath she told me we needed to call a motel ASAP and get a room with a hot tub and pool...she did not want them to all get sold out.

These photos were taken by a friend of ours, Oakey Pruett 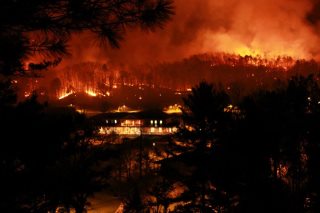 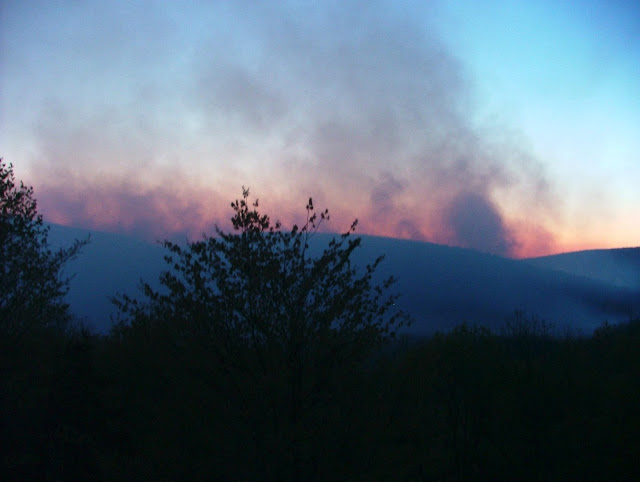 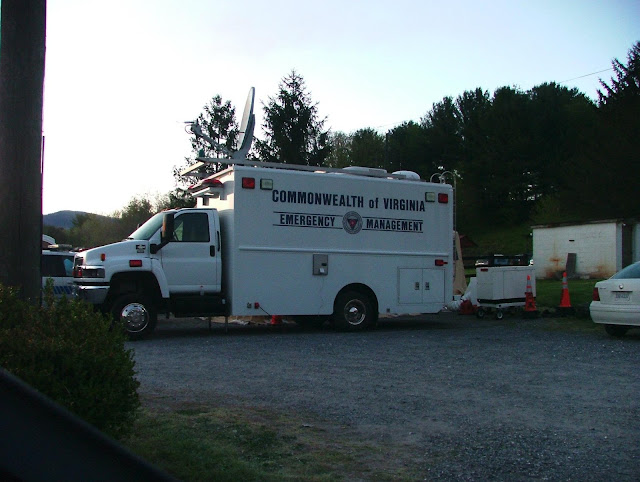 Well, the 5 different fires are still burning ~ as of now 20% under control ~ and there are fire fighters here from all over the state. They are expected to continue for a week. The air in and out of the house smells like smoke, though outside is unbearable. The winds have finally turned it away from us so we are not seeing fire trucks and sherif cars zooming up and down our road. Interstate 64 was closed for a good bi
COMPUTERS NOT WORKING
The final blow has been none of the computers were working until today. Something about the addresses in the router had gone cafluy. After hours with AppleCare we are up and running again, but I still cannot sit up for long. Have a great selfie to post - I took it while I was on the slab and the doctor and techs were doing the myelogram. Eloise and I also went picture taking and I did get some great shots of the new barn at Big Spring for Barn Charm though it will be a week late.

Hope all of you are well and had a wonderful Easter. I appreciate so much the notes from those of you who were wondering where I was. Hopefully, Monday I will be back up and back to my silly self and will feel like playing on the computer.