A week ago after I got home from town, it wasn't long before I heard one siren after the other. At first I just thought it was another truck wreck up on the Interstate, but there were way too many trucks zooming by the house with their noise makers going like crazy. I walked out our driveway, and the first thing I saw was lots of fire trucks and vehicles all up and down the highway. Our house is on the left behind and just past the 2 vehicles and the truck. As I walked across the street, I saw all of these other trucks and knew it was the Hartbarger homeplace. For years, I used to walk up and down the road with them, but they are all gone now, and a grandson of one of the sisters lives in the house. All of these shots are SOC...both my iPhone and my hiker Canon. Let me tell you that no one was hurt. I did not go across the road to gawk, but rather to be of any help I could be to the family. The very elderly remaining sister with Alzheimer's got out as well as the others, and she has been taken to family in MD, while the rest are living in the old green Stonewall Service Station off to the right that I have posted in the past...remember this: 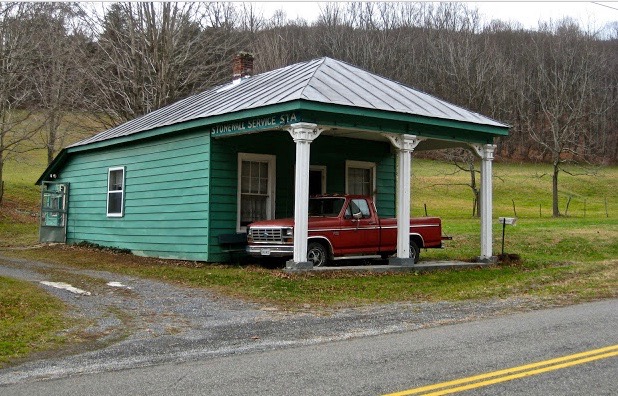 The grandson says he is going to fix the burnt out house, but I do not see how that is even possible. The fire department called it a total loss. 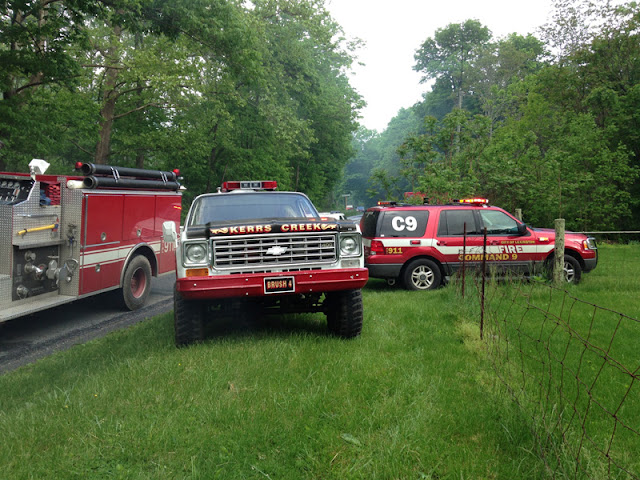 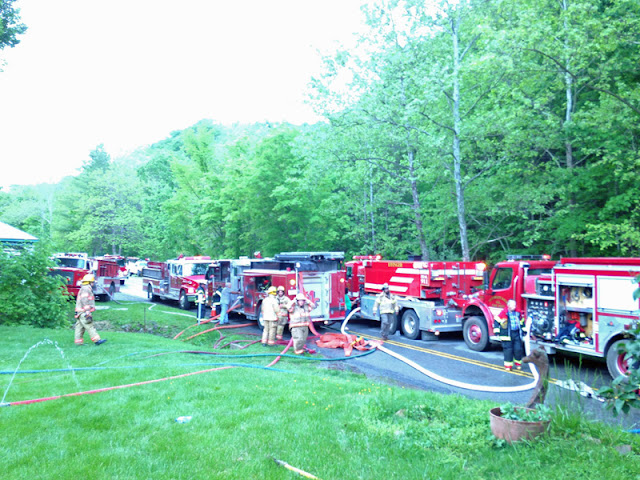 There were three tankers and they were pumping from the creek in front of our house in 3 different places. They also put up what looked like a BIG square red swimming pool in the road where the hose is. I think maybe that is what you are seeing on the blacktop  before it was inflated.
I took the following pictures as the fellows were fighting the huge fire. They were so young, and it was so frightening to me seeing them put their lives on the line like that. So many of the volunteer firefighters in this area I taught which makes it very personal. The smoke was so severe at one point I started gagging. Never have I seen anything like this. 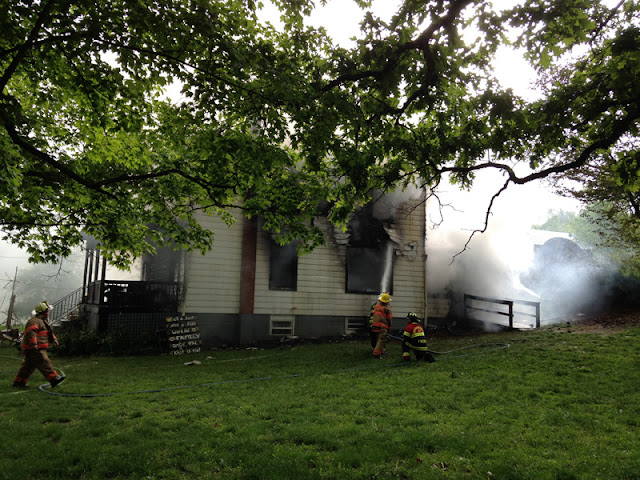 There were a lot of flames forming from this first floor read window. 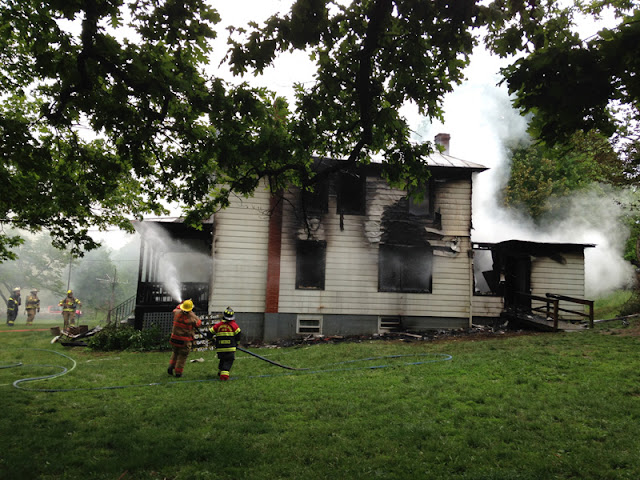 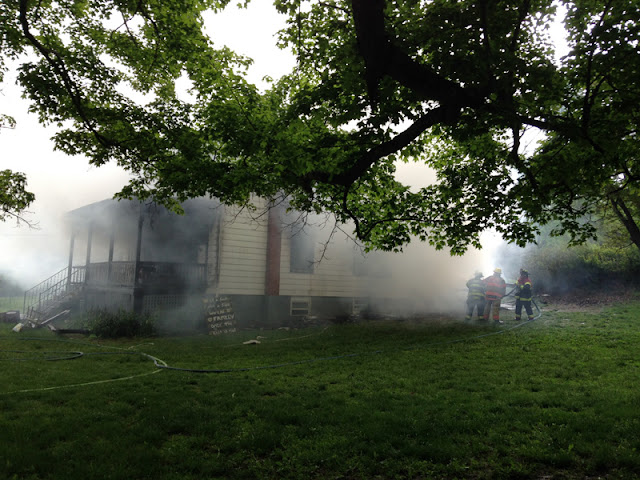 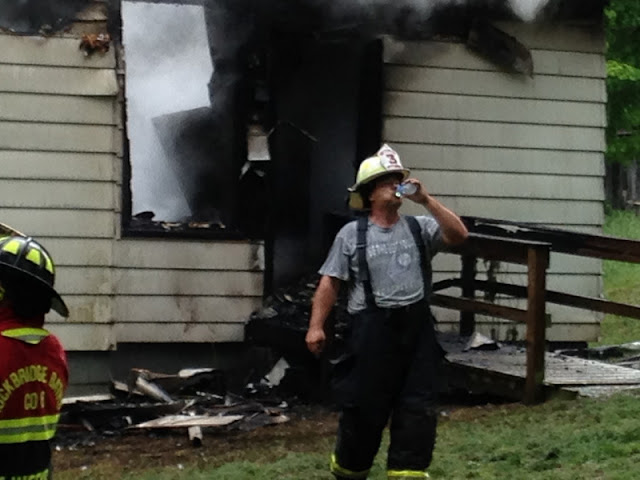 Even a volunteer firefighter needs a bit of water at times like these. 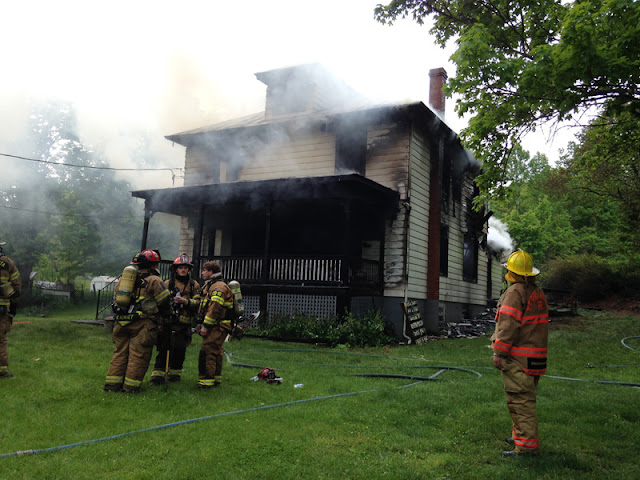 Here the discussion begins about going into the house. 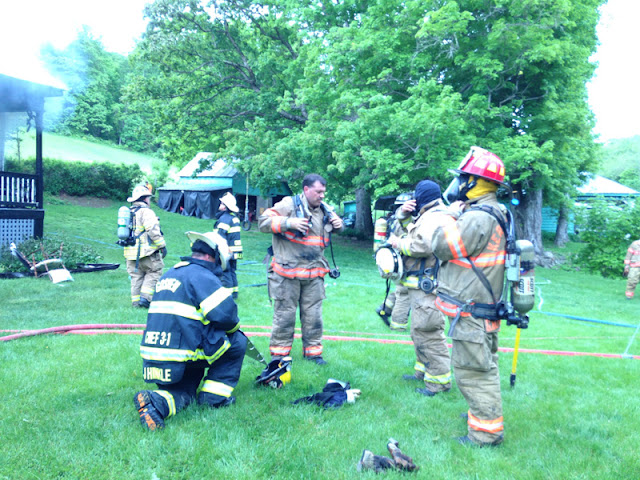 Here they are gearing up to go in.
The fire appeared to be out in the front but was still raging in the back. 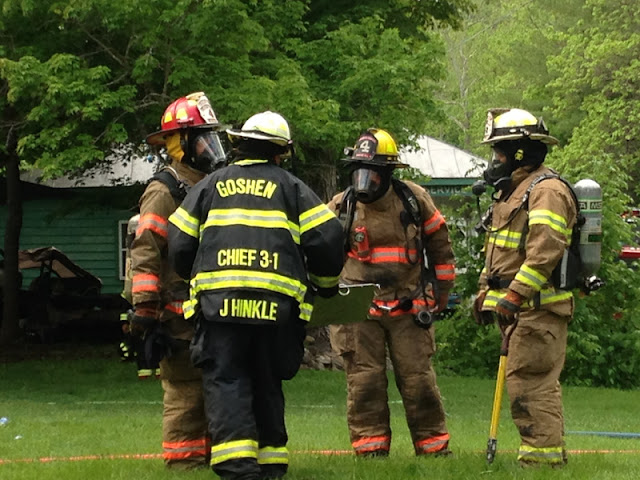 The Goshen,VA, volunteer chief is giving them their final instructions. 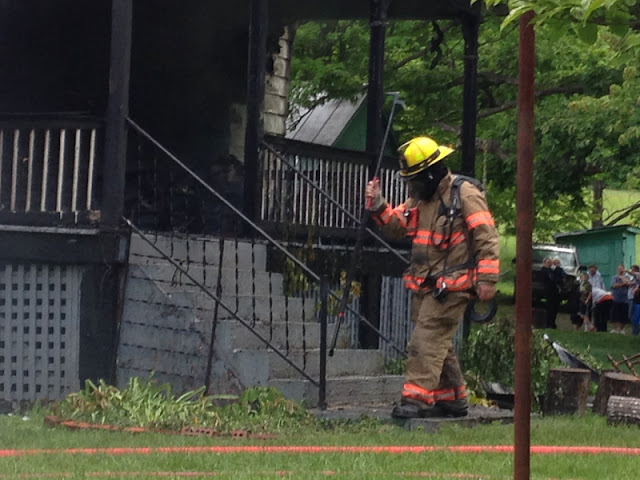 Here is the first one gong in. I became so upset I had to turn and walk to the other side of the house. I overheard one of them say his foot had gone through the floor but was OK. I could not look so I do not know if the others went in or not. I kept wondering about the oxygen. I thought it was inflammable, but the tanks were on their backs, black face covers pulled down, then their breathing gear on their faces, and their helmets. This one man had what I thought to be some sort of a long axe. 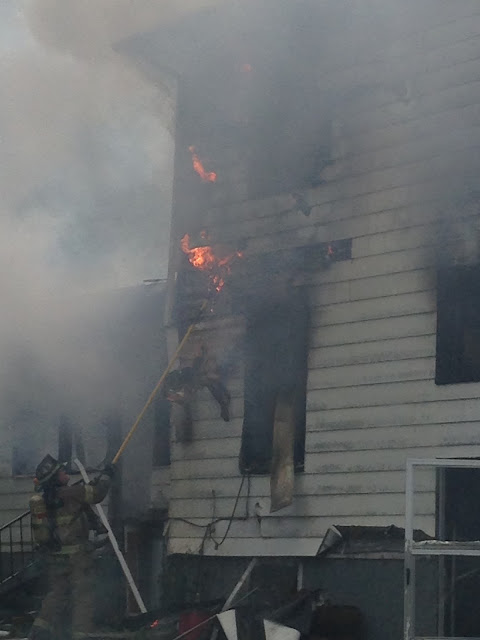 When I got to this side, I saw the fire blazning on both floors.
It was like it was never going to end.

These last two pictures Buddy took when he went out to run the next morning. 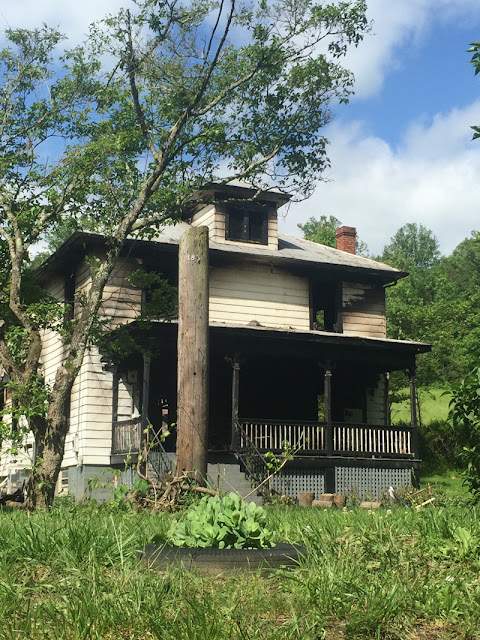 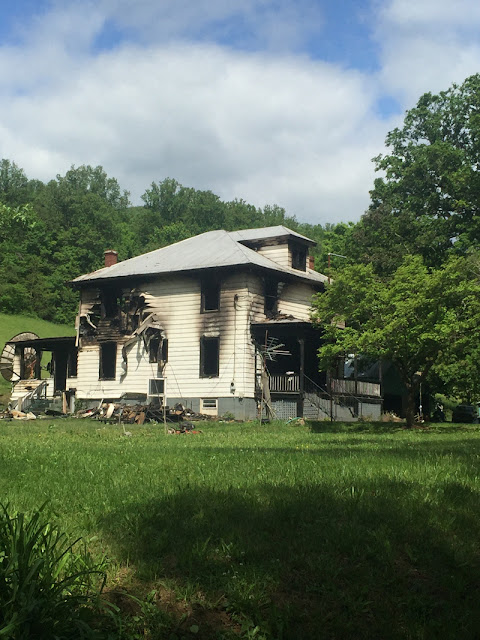 Before I close out this post, I just want to say how professional and committed these young men were under such frightening circumstances.  Our volunteer fire departments can mean life or death to us  who live way out in the country where there are no fire hydrants. We the homeowners  MUST be on our toes about protecting our homes from fires like this. Ours is 100+ years old, and I feel sure it would be gone before the trucks ever got here. The Hartbatger home was not as old. All we have is the creek that runs in front of the house - and most of the time it carries little water - and to compound things you have to cross our "Bridge to Somewhere" to get to the house. It would not hold tankers, and I question if it would support the firetrucks. I have always been afraid of fire. My daddy was a safety engineer with the Corps. of Engineers, so I grew up in a house that had SAFTY FIRST written all over it. I never leave the place without double checking that all lights, fans, window AC's, the dryer, the coffee pot, my heating pad....you name it and I double check to be sure it is turned off. Still, we could be hit with an electrical fire in a split second. We sit almost flat on the ground with no basement so have all kinds of varmints under there chewing away on whatever they can find to put against their teeth. We just have to be careful, review our our escape plans, and pray our guardian angel is looking after us. We also continually put out our No Kill traps trying to catch the pesky and noisy visitors. When Buddy gets one, he drives it up on the mountain and drops off his little friend to start a new life far away from us. We all need to give thanks for the blessings we have received. It is called Gratitude.I cannot begin to imagine what it would be like to be in this situation. 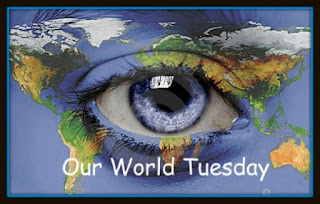