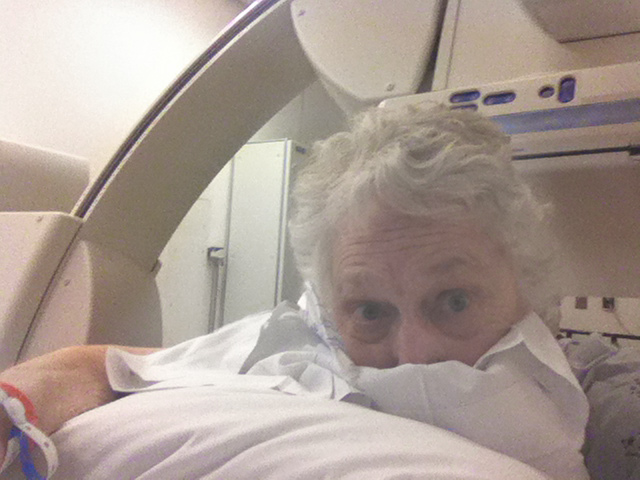 I am a week late posting this selfie because I was out of commission. Last Monday I had to go to UVA for a myelogram of my back, a CT scan,  a bone density test, and finally an appointment with my neurologist who specializes in Scholiosis {curvature of the spine}. What a LONG day it was, but I did survive it. I took this picture after the radiologist had injected the dye into the liquid sac around my spine. Since my spine is like a complete S - 2 curves - the poor technicians had a heck of a time getting the dye to go up the Yellow Brick Road to the home of the Wizard of Oz. Each time it would get to a bit of a curve it would stop. Then the techs would tilt me up, down, sideways, foam under the head, foam not under the head...and all the time they were doing this I could NOT raise my head. Trust me, it was like a three ring circus in there. We were all giggling and having the best time. I am one that is always determined to make lemonade when given a bunch of lemons. There was no pain involved except when they injected the lignocaine at the point where the real needle had to go. My legs cramped a lot from the irritation brought n by the dye and my head felt like it was going to burst. That gradually got better as time went on.  I got to watch the whole thing on the the big overhead computer screens.It’s unbelievable how far medicine has come in my lifetime. The techs cracked up when I told them about my being a middle school prison matron, the blog, and my selfies. I explained could not go a Monday without taking one so it had to be there in that room with me on the table. This is it...SOOC. 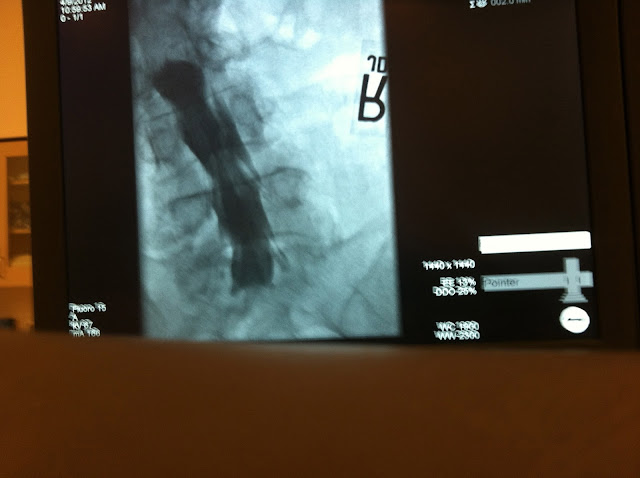 I also took this one so you could see the dye as it was moving up my spine. You can also see some of one of the curves and my poor old discs. This was at the beginning of the procedure so I still had a long ways to go. They are supposed to be nice little rectangles all lined up in a row, but that is not the case. They all look like a varmint had bitten a half circle out on each side and then moved the disc around just for fun :-) All the little spikes coming off the discs are from osteoarthritis. We also found my left hip had been eaten on by the varmints leaving me with less mass. Now I am on copious amounts of calcium and Vitamin D. If any of you are told you have to have a myelogram, do not fear. It is not nearly as painful as giving birth or breaking a bone and the information your doctor gets from it is invaluable. We now know if it continues to worsen with age he CAN operate on me successfully fusing  2 discs at the neck and 2 in the lower lumbar. For now I refuse to even consider that as a possibility. Pain shots in the back and anti spasm drugs are the route I have elected to take. I am still so lucky. I could be ill like so many of my friends and unable to work or hike, or do the things I adore doing. I can still do them all, but I must do them carefully. So there you have it and it is SOOC. My selfie from last Monday. This weeks is a cute one with my Eloise. 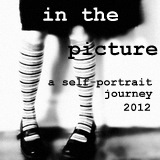 Labels: {in the picture}, myelogram, selfie