Buddy and The McDonald’s Half Marathon ~ Richmond, VA

So sorry the shots are not larger. For some reason clicking on the photos is not enlarging them. I did find if I hit command and the + sign, I can enlarge the collages to see more of the details...especially the runners in the second one.

This collage takes you from the night before when he got his stuff together until the end. The girl is Helen who works with Buddy at the Outfitters and ran the Marathon. He was freezing walking from the car to the race. I took photos of him from front and rear.Yes, Bud used the Port-a-John before the race, and Gene and Eloise are sitting under the tree waiting for Grandbud to round the curve. The 2 shots of him running are right in the neighborhood where Gene and the family live. The little boy playing while waiting for his family runner was the cutest thing ever. That last shot of Gene and Bud was Gene congratulating him on a job well done. He made it in a smidgin over 3 hours....he was thrilled. He was so worried that morning, but at the end of the day he was one happy runner at 59.

These are the “real” Marathoners. Buddy was quite lucky in that they happened to merge into the half marathon just where Buddy was running. Gene had a great time with his iPhone and his Photoshop skills. Look below and you will see the results. 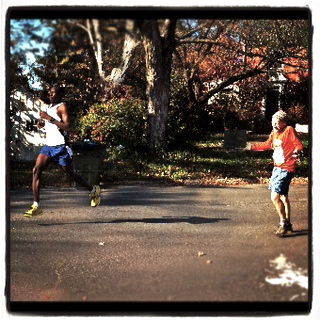 Buddy Is a Close Second...Only in his dreams!
This post is linked with Ruby Tuesday and Our World Tuesday. 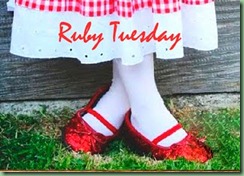 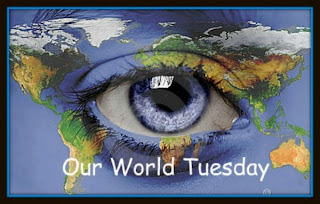